At the International Olympiad in Dublin we won three Golds, two Silvers, and the team trophy for the individual event … See the press release.

July 2015. Wonderful results for the UK at the International Linguistics Olympiad in Bulgaria

Thanks to generous funding from the Leverhulme Trust and strong support from the University of Manchester and Manchester Grammar School, we welcomed 142 school children from 26 countries, and even managed to win six awards. Apart from the grueling competition itself, everyone seemed to enjoy the chance to do interesting things such as watching cricket or visiting Jodrell Bank or Chatsworth, and we even saw some sunshine.

In Spring 2012 the British Academy agreed to provide funding for an analysis of UKLO’s performance in the first three years, 2010-2012. UKLO appointed Laura Tomlinson to carry out the analysis and write the report, under the guidance of Graeme Trousdale. This analysis is now complete, and downloads are available:

The actual entry figures, based on the scripts marked centrally at Advanced level and the results submitted for Foundation and Intermediate levels, while lower than those based on entries predicted in January, show two important trends:

The year-on-year figures since 2010 are shown here:

The following figures show the entries that were notified just before the start of round 1:

I.e. Whereas until now each year doubled the year before, this year we’ve TREBLED it!!! And nearly all the growth has been in Foundation and Intermediate entries, which is especially good news because this year’s F/I entries may be next year’s Advanced entries. There’s also been a welcome shift in favour of maintained (i.e. state) schools, especially at Foundation and Intermediate levels.

. Given a whole-page spread in the new language magazine, Babel. 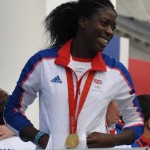 . Triumph for our patron, Christine Ohuruogu, in the London 2012 Olympiad

.  Triumph at the International Linguistics Olympiad.

15 December 2011. We promised in July to host the International Linguistics Olympiad in July 2013, in the hope of raising sponsorship to cover the costs. In December we heard from the Leverhulme Trust that they have agreed to provide £53,000 which should cover all (or at least most) of the costs; we are extremely grateful for the Trust’s support.  We plan to hold the event in Manchester using a combination of Manchester University’s halls of residence for night-time accommodation and Manchester Grammar School’s rooms during the day.

29 July 2011. We learned that two of our team-members  in the International Linguistics Olympiad won awards: Nicholas Moore won a Bronze medal, and Piotr Galuszka received an Honourable Mention.  Our warmest congratulations to both of them!